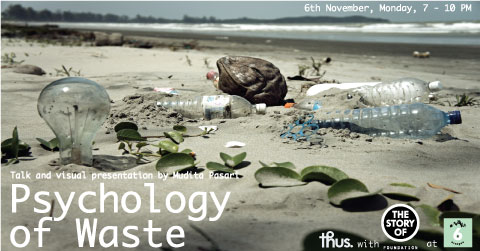 This discussion aims at addressing both the psychological and physical manifestation of waste. Is waste a concept of the past, with present repercussions? Which areas are waste friendly? What are the complications of having more waste? What are some solutions that we can share? Can we phase out waste? If so, what are the current methods of doing so? We often keep our private spaces clean but there is a divide between the public and private, which has physical and mental repercussions. We have multiple means to hide our waste, e.g. sending it to outer space; dumping waste into oceans that precipitate new waste continents; building cities/parks on waste buried underground (often untreated and hence harmful).

The speaker, Mudita is a narrative and strategic designer who works at the intersection of people, nature, narratives and spaces. She is trained as an Exhibition and Spatial Designer, from the National Institute of Design, India and has received her Masters in Design Education from the Rhode Island School of Design. Her research builds upon the role designed visual education plays in instigating the rebuilding of social perspectives; through reinterpreting ambiguity and embracing multiplicity. As a 2017 STEAM Maharam Fellow she is currently working to incorporate the discussion of shared urban spaces between wildlife and humans, into the mainstream education system, starting in north-eastern India.

It is a donation based event. North eastern food will be available.